Aeronautical and space maintenance and CMMS are essential elements in the industrialization of Ariane 6 rocket engines, designed and developed by Ariane Group: for manufacturing, assembly and test benches. The Ariane Group site in Vernon has been using CARL Source since 2013 across all its methods and highlights the most advanced business capabilities of the CARL-Berger Levrault software package. This namely illustrates the power of the Control-S function for its regulatory maintenance.

With nearly 9,000 employees in France and Germany, Ariane Group is a joint venture between Safran and Airbus and is the world leader in “access to space”: €3.6 billion in turnover, and eleven subsidiaries or holdings in three main business sectors: space launches (Ariane 5 and 6), defence with M51 missiles, and equipment and services for satellites and spacecraft in particular.

Maintenance: an element to be customized depending on the sectors?

In operation since 2003, the Ariane 5 rocket is considered the most reliable launcher in the world. The ECA version can carry more than 10 tons in geostationary transfer orbit, and remains the world leader for the positioning of telecommunications satellites. Ariane 5 ES is a solution adapted to launches in low or medium orbit (ISS station, Galileo constellation). Despite the arrival of newcomers such as SpaceX, these launchers are still the benchmark. 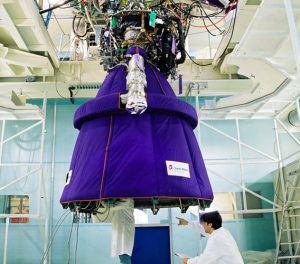 The fact remains that the Group is predicting the future, with Ariane 6 introduced as “a launcher adaptable to all missions.” The key words: versatility (several caps and configurations, all orbits) and industrial efficiency. With a first launch in 2020, Ariane 6 offers 12 tons of thrust with its two boosters and its two engines: Vulcain, and Vinci, the latter being assembled and tested on the Vernon site, in Eure (Normandy) which employs 1,000 people, and includes a test area of ​​116 ha, where the manufacture, assembly and test benches of the Vinci engine are located.

“…more than 300 people work in maintenance.”

Maintenance must be personalized according to the sector: manufacturing, assembly and test benches require different types of maintenance. All with a wide variety of activities that involve heavy facility management.

In total, more than 300 people work in maintenance: in production, processes and safety, in an evolving framework and also with external service providers, and even in upstream where design offices must integrate maintenance from the design stage.

The maintenance volumes are huge: more than 15,000 actions per year for approximately 25,000 localized devices! “As a result, a single aeronautical and space CMMS tool is used on this site and shared by all the players,” insists Pierre-Guillaume Ritter, CMMS administrator on the Vernon site. This makes it possible to centralize and share information, to schedule and coordinate all maintenance activities, and to monitor progress towards reaching the objectives.

With regard more specifically to the maintenance of test benches, “the business problem is made even more complex by the technologies used: hydrogen-methane propulsion, special processes for machining of hard materials, and cryogenic installations,” explains Pierre-Guillaume Ritter.

In the end, it’s about being able to have a versatile CMMS, but which is also flexible enough and has enough features to meet this broad range of needs in one go.

As early as 2013, the site migrated to CARL Source. The CARL Berger-Levrault software package offers a very comprehensive set of features. Ariane Group currently operates V5 of the software and uses all of its features on the Vernon site.

One of the great advantages of CARL Source V5 has been to be able to customize the maintenance management software to adapt it to all needs.

In managing risk control measures first: “We are a Seveso High Threshold classified site, which requires measures to protect the site from a possible incident.” Aeronautical and space CMMS allows you to type events; but also to quickly find the interested elements. “This customization was able to be done in-house, and the masks could be adapted.”

Focuses on indicators could also be created. The users are able to access this level of customization in most cases.

For the future and optimization of regulatory maintenance, the option Control-S is very promising: the automatic import of regulatory controls can save a lot of time, whereas today it is performed manually by the maintenance pilots.

THE ADVANTAGES OF CARL SOURCE CMMS

Would you like more information about our CMMS solutions?

This website uses cookies to improve your experience while you navigate through the website. Out of these, the cookies that are categorized as necessary are stored on your browser as they are essential for the working of basic functionalities of the website. We also use third-party cookies that help us analyze and understand how you use this website. These cookies will be stored in your browser only with your consent. You also have the option to opt-out of these cookies. But opting out of some of these cookies may affect your browsing experience.
Necessary Always Enabled
Necessary Cookies are essential to the functioning of the website. It includes only cookies providing basic functionality and security features of the website. These cookies do not store any personal information.
Analytical
Analytical cookies are used to understand how visitors interact with the website. These cookies help provide information on metrics for visitor count, bounce rate, traffic source, etc. Our analysis tools anonymize the data before processing.
Functional
Functional cookies help to perform certain functionalities such as sharing website content on social media platforms, playing Vimeo videos, etc.
Save & Accept
Powered by